Nuclear technology can help Pacific islands in a range of areas, including health, agriculture and the environment, IAEA Director General Yukiya Amano said last week during the 10th Conference of the Pacific Community (SPC)held in Noumea, New Caledonia.

Last month, the IAEA and the SPC signed an agreement in Vienna to provide nuclear technology to the Pacific region, initially in support of increasing food security and improving nutrition. The agreement also aims to help the region manage land sustainably and adapt to climate change and its effects on agriculture.

“Many Pacific islands face unique challenges, including high vulnerability to the impacts of climate change, increased soil salinity, declining groundwater resources and low crop productivity,” Mr Amano said at the conference. “Nuclear technology can help in all of these areas.”

Nuclear-derived techniques, for example, can be applied to measure and monitor the impacts of ocean acidification and help identify the sources of pollution in the sea — essential information for populations that rely heavily on the sea for their food and income. Nuclear technology can also help countries struggling with limited land space to better manage their water resources through smart agriculture and to develop new crops that are resistant to salty soil.

“Nuclear technology plays a much bigger role in our daily lives than most people realize,” Mr Amano said.  Addressing the conference’s theme, innovative partnerships for sustainable development, he spoke of the IAEA’s work with countries around the world. “Our most important partners are, of course, our 168 Member States,” he said, encouraging SPC countries that had not already done so to consider joining the IAEA.

Of the SPC’s 26 members, nine are also Member States of the IAEA.

Other key Agency partners included the World Health Organization — on cancer and other non-communicable diseases — the Food and Agriculture Organization of the UN — on improving food security, and leading NGOs and private companies.

During his visit to New Caledonia, a French overseas territory, Mr Amano met President Philippe Germain, and Prime Minister of Samoa Tuilaepa Sailele Malielegaoi, as well as Ministers and officials from Australia, the Cook Islands, Palau, Kiribati, New Zealand and the Solomon Islands. He also visited the radiotherapy centre, at the site of the recently opened Medipole medical facility in Noumea. 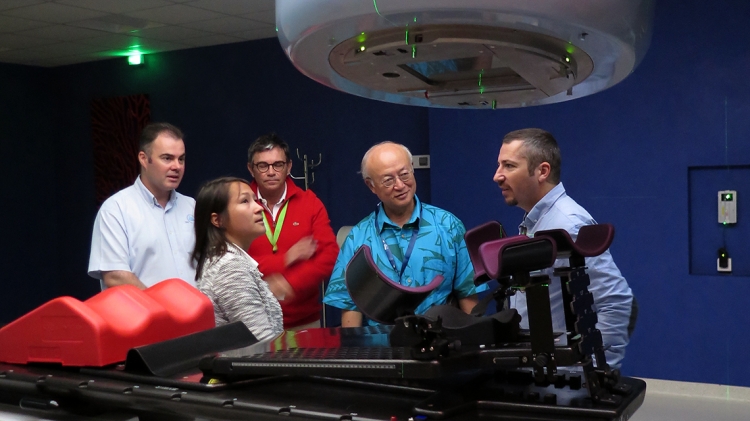